This week our blog is a bit different...we recently sponsored Lulu Murphy on her travels to Cambodia, where she was spending a month with families throughout Cambodia to offer vital development within their villages. We support a couple of local charities - Mind BLMK and BEAT - but as a local teenager, we thought it important to get behind this goodwill mission and offer Lulu some sponsorship...on the condition she write a piece telling us all about how she got on! So, here it is... 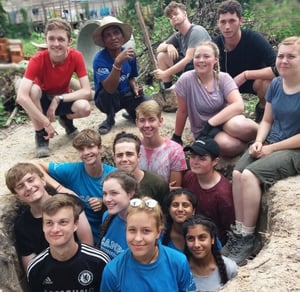 On the 18th of July, I, along with 31 other students from my school, got on a flight that would take us to Cambodia. The purpose of our visit was to spend a month there helping small rural villages that were being desperately left behind in comparison to development in the cities. We helped plant trees, made a chicken coop, dug a well and even had the chance to teach some of the adorable school children English. 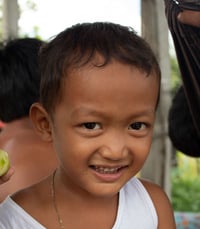 The initial shock of the humidity in the air soon wore off as we went to our first camp, Camp Beng Mealea. Our beds were stationed in long houses, meaning that we were constantly exposed to the climate, helping us quickly to acclimatise. I thought that the heat would have been a big issue for me, but it wasn’t. Whilst at first being self-conscious about sweating so much, due to the work that we were doing, I soon realised that everyone was in the same boat; and as long we drank enough and wore our caps, heat wasn’t going to be an issue. 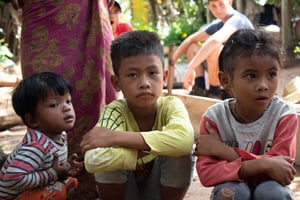 To get as much work done - whilst still having time to relax in the evenings and late afternoons - the camp manager, Han, instructed that we get up at 6:00am every morning. When we all heard this on the first night, baring in mind that we were all teenagers, and we cherished our sleep, our jaws dropped. Soon though, we realised that it didn’t matter because the sun woke us naturally. It became a routine, one that was nice to have after having almost a month off school, for. We’d go to bed relatively early and wake up early, allowing us to get a lot done during project work throughout the day. 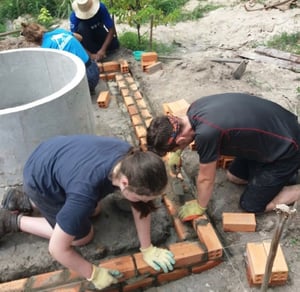 The first day of project work was tough. Looking back at it now, I realise that, had I dug the trenches at the end of the trip I would’ve found it much easier, due to getting stronger as the month progressed. Nevertheless, we were all in pain and as bad as it is to admit, I think we were already wishing we could return home. That attitude didn’t last long though. Thankfully, it was turned around once we had completed our first main project; a chicken coop. Whilst it may sound like such a trivial thing, it meant that the family would be able to eat and sell eggs and chickens. They were incredibly grateful. It showed me that, although to us, it was only something as small as a chicken coop, it would make a huge impact on their lives. From that moment on, we could all see that even the smallest of help would make a big difference. 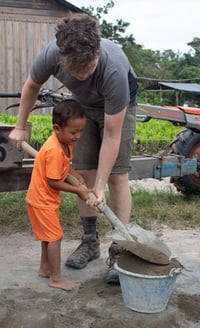 Overall it was an amazing experience and although it sounds cliché, it really has shown me to cherish what I have. Cambodians are the friendliest people I’ve ever met, but they’ve been through a lot and still are recovering from the awful Khmer Rouge regime that occurred 40 years ago. Although many lost everything, the smallest of things that they do have, they are grateful for. I will never forget the friends that I made, the stories they told us and how welcoming they were in inviting us into their community.

To here more about Sherpa, our community outreach and what we do, please get in touch on 01234 964000 or drop us a line at letschat@sherpamarketing.co.uk.

Sign up to our blogs today and we'll send you some of our best bits direct to your inbox. Don't worry - we won't bombard you, but will share some best practices, tips, and hot topics that you need to know about!